A Quiet Place to Make Music and Putter 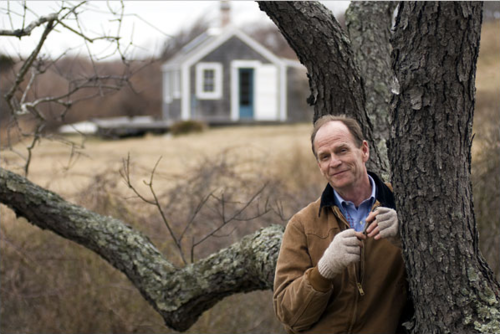 AFTER a drive down a winding, mile-long dirt road on Martha’s Vineyard, a weathered blue oar propped against a tree comes into view, a faded house number on it. The oar, long separated from whatever craft it once propelled, stands at the entry to the home of the singer-songwriter Livingston Taylor.

Outside on a sunny spring day, Mr. Taylor is tinkering with a tractor. After a friendly handshake, he looks up and points out an osprey nest atop an old electrical pole about a hundred yards away. Quickly, he heads inside to grind beans for a fresh pot of coffee.

Mr. Taylor, 58, first came to Martha’s Vineyard with his parents and siblings in 1954 at age 3. He has since spent every summer of his life there, and the Taylor clan has become intertwined in the fabric of the island.

His older brother James is a five-time Grammy winner; his sister, Kate, is also an accomplished musician; and the youngest sibling, Hugh, owns the Outermost Inn in Aquinnah, at the western end of the island. The eldest brother, Alex, also a singer, died in 1993. Their mother, Trudy Taylor, 86, is a painter and still lives in their first family home on the island, bought in 1963.Livingston Taylor began writing songs at age 16 and has recorded 14 albums; his most recent, “There You Are Again,” was released in 2007. He is heading to Nashville in May to finish a new recording.

In 1977, he bought a 300-square-foot home on four acres for $111,000. The tiny house, which he calls the camp, sits just 10 feet from a freshwater pond on the north shore of the island, with expansive views of Vineyard Sound beyond. In the distance, the Gay Head Lighthouse appears as a speck on the horizon.

“I was acutely aware of this little camp on the pond being grandfathered in,” Mr. Taylor said. “You could never again build such a thing so close to a pond.”

He had looked at approximately 10 other properties on the island. But this place was special; he was captivated by the interplay of fresh and saltwater. “I drove in here 31 years ago and took a look, and I said, ‘We are all set.’ ”

When at the camp, Mr. Taylor often writes and plays music. And he putters.

“When I have a vexing creative problem to solve,” he said, “doing something trivial allows the problem to percolate in a recess of my brain, and once the trivial problem is solved, the difficult problem is seen in a new light.”

His version of puttering?

“Fixing lawn mowers, tractors, working on my motorcycles,” Mr. Taylor said. “I innately know how things work, and how the machines that made them work.”

Surprising words from a man who writes songs about love and loss, lessons learned and memories of family.

Mr. Taylor, who lives full time in Watertown, Mass., is a professor at Berklee College of Music in Boston, where he has taught a course called Stage Performance for 20 years.

“Once a semester, I’ll sneak in a great talent to come and speak to my students,” Mr. Taylor said. The singer John Mayer was a guest lecturer last fall; others have been Jimmy Buffett, James Taylor and Steven Tyler of Aerosmith.

When he bought the camp, which he believes was built in the 1950s, the land around it was overgrown with brush, including large quantities of poison ivy that needed to be cut back. In what he said was “clearly a Ronald Reaganesque moment,” he did all the brush removal himself.

The fact that the camp was so small appealed to him. “For me, as a 27-year-old,” he said, “I was just married and hopelessly in love, and the idea of the forced proximity was in itself a reason to buy the property.”

The house is still simple inside. There is a small bathroom, a cooking area and the main room, where sunlight streams in over a 1950s kitchen table. The table was placed next to the window to face out toward the pond and the exceptional views. “This is a magical spot for writing,” Mr. Taylor said.

“When I first got here,” he said, “in the winter, I had to bust a hole in the pond for water and use the wood stove to heat it.”

He has rigged up a wood-fired hot tub outside. “In the middle of winter, to be in this tub with a storm raging around me, in the middle of the night — ” he said, drifting into a state of reverie.

The traffic-clogged highways out of Boston to Cape Cod have not prevented him from frequent visits: Mr. Taylor, who has been a pilot for 17 years, flies to the island in his 1964 Cessna 205. The flight takes about 40 minutes from Boston.

“It’s awful handy having that pesky airplane,” he said.

In 2001, tired of the challenge of staying warm at the camp, he built a 1,600-square-foot house up the hill from the camp. It has central heat and is winterized, so he divides his time between the big house and the camp.

Then in 2003, when Mr. Taylor was going through the process of ending a 25-year marriage, he sold the property to his neighbor, who was also a friend, to satisfy legal requirements. He arranged for what he said “is a long and stable lease so that the world there and my life there remains unchanged.”

His brother James has his own memories of time at the camp.

“I remember building fences and of putting up an owl house,” he recalled by phone from his home in western Massachusetts. “All three of us brothers are handy. We can do rough carpentry.”

There is no sense of competition between these brothers.

“I got the early attention,” James Taylor said, “but there is no real reason that it couldn’t have been Liv. We could easily have swapped. Our sense of the world is informed by each other.”

James and Livingston Taylor have played together on recordings and at political benefits. And they were integral to the success of what became a legendary music club on the island, the Hot Tin Roof.

Livingston Taylor has been performing around the country about 40 years, and these days his audiences are typically 500 to 600 in small clubs in places like Tarrytown, N.Y., or Lancaster, Pa.

For his recording in Nashville, he has lined up a bluegrass session with the core members of Alison Krauss’s band. Why Nashville?

“I did my last one there, and had so much darn fun I wanted to do the next one there, too,” he said. “It is the final resting place for the old-style pop music sensibilities that define my generation of musicians.”

And he has all new material to record. “Not a small amount of it,” he said, “was written in this very camp.”

Every summer, the camp is his refuge, where he lives and works, the enveloping silence of the place one of its draws. “Silence is important to me,” he said, “but make no mistake about it, it’s not quiet down here when the wind is blowing.”

When asked if he was a loner, Mr. Taylor thought for a moment and responded, “I think creators need to spend quiet time listening for the soft voices of their muses.”

That could explain why he prefers places where he said “time has stopped,” like Haines, Alaska, which he’s visited about 15 times. “It is unbelievably pleasant and simple,” he said, “with glaciers that pour out of the mountains like iridescent monsters slithering down to the sea.”

Even so, he recognizes the passage of the years, and his connection to the camp on Martha’s Vineyard.

“All the old-timers at the end of this road are gone,” Mr. Taylor said with a rare smile. “Now, I am the old-timer.”