In Advance of Next Month's Show at Music Box, Livingston Taylor Talks About His 50+ Year Career 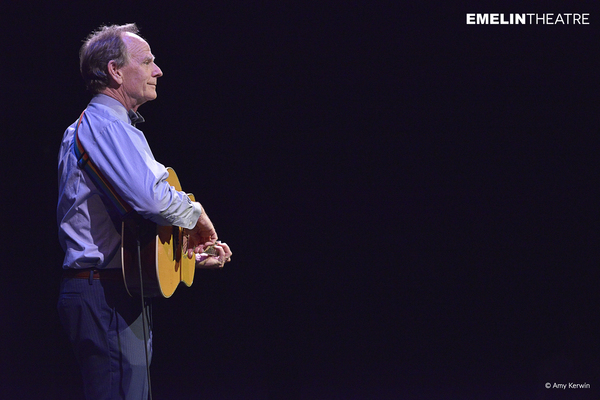 Back in 2017, singer-songwriter Livingston Taylor reached a significant milestone; his musical career reached the 50-year mark. As a result, the mayor of Boston and governor of Massachusetts declared a Livingston Taylor Day to mark the occasion.

“It was my manager’s idea to do a fiftieth celebration,” says Taylor via phone. Livingston Taylor performs at 7:30 p.m. on Thursday, Jan. 13, at Music Box Supper Club. “I don’t think much about such things, but I’m so glad I did it. It was fun, and we had a terrific time, and a lot of dear friends were there. It was a very special time.”

This year will mark 55 years that Taylor has been in the business.

“Yeah, I guess so,” says Taylor when informed about the anniversary. “I didn’t keep track then, and I’m not keeping track now. Hopefully, my manager is, and he’ll re-remind me that it’ll be five more years come and gone.”

Though Taylor comes from a musical family that includes his brother, singer-songwriter James Taylor, things didn’t exactly get off to a great start. Taylor has said the first song he ever wrote, 1966’s “I’m Searching for a Miracle,” was “absolutely awful.” So what kept Taylor going after such a shaky start?

"What kept me going is what keeps all of us going at the age of 17,” he says when asked about why didn’t just quit then and there. “It was stunning naivete and a lack of experience with everything. As I said in another song, ‘So much youth and so few brains/how did we all survive?’”

“Good Friends,” the second song Taylor ever wrote, had more staying power. It became part of his repertoire for years.

“I was too naïve to understand that the first song wasn’t any good,” Taylor explains. “So I wrote another song and another and other. I got better at writing songs and writing lyrics. I got sharp and focused, and then, I got sloppy and unfocused and arrogant and became a bad songwriter again. And then, I got my bottom spanked and became a good songwriter again. I did it and liked it and did it again, and people gave me positive affirmation. Then, you go through a period when you can’t write, and then you go through a period when you write and nobody likes it. Welcome to what it is to be a creator.”

In 1970, a turning point came when Taylor talked to Phil Walden and Jerry Wexler, guys who had just started a then-unknown label called Capricorn. They were just starting out, but Taylor liked their approach.

“They expressed enthusiasm for what I was doing, and they put money where their mouth was,” says Taylor. “That’s a lot. They offered a contract, and I took it. When I signed the contract, I did know enough to put in a clause that it ended in three years — regardless of what happened. I was smart enough not to get bound into an unrecoverable contrast. I signed away some of my publishing. That was fine. They were taking a chance on an unknown kid.”

Taylor’s first hit, the twangy “Carolina Day” straddles the line between country and folk-rock as Taylor alternates between rapidly singing the song’s lyrics and crooning the refrain.

“My writing is not straight-up country,” says Taylor. “‘It’s pretty intricate writing, and all my songs tend to be that. They have a lot of lyrics and a lot of melody. I’m an intricate songwriter.”

Though Taylor grew up listening to folk music, he also absorbed plenty of Broadway show tunes, and he says the latter had more of a lasting impact.

“My parents played a lot of Broadway around the house,” he says. “The chord structures and sensibilities are folk music but clearly the strength of the chord changes and melody lines is Lerner and Loewe and Rodgers and Hammerstein. It’s a sophisticated structure.”

Taylor churned out a number of hit songs in the ’70s and’80s and then began teaching stage performance at Berklee in 1989.

“I love to teach in general,” he says, adding that he no longer instructs at the prestigious university. “I really understood that to teach stage performance would give me a platform to perfect stage performance. You learn in teaching so much more, and you get so much more than you give. It’s allowed me to develop as an entertainer.”

Taylor is currently teaching four master classes at the University of Miami’s Frost of Music, something he says suits his old school approach.

“At 71, I’m at the end of my time in a classroom with a group of students," he says. "I’m at an age where I used to be their older sibling and then their parent and then their grandparent and now I’m edging into their great grandparent. It’s a little far away for me. The experience pool I teach from is an experienced pool of Lerner and Loewe and Rodgers and Hammerstein and Cole Porter. I’ve toured with Linda Ronstadt and Jethro Tull and Emerson, Lake and Palmer, and Fleetwood Mac. These are not people that these kids know, so my experience is of a generation that gives me no street cred with them.”

Taylor often lands on the Cain Park summer schedule, and he says he has many great memories of performing at the Cleveland Heights venue.

“Oh, my God, I love Cain Park,” he says. “One of my favorite moments ever happened at Cain Park. There was an older woman — and coming from me, that’s saying something — and she waited and waited to speak to me. Finally, I had signed all the CDs, and everyone had left. She came up to me and said, ‘I have been a voice teacher for 40-odd years, and I think you are a great singer.’ I went, ‘Wow.’ I remember that moment so clearly."

That experience cemented his love for Northeast Ohio.

"I love Cleveland. I love Ohio," Taylor says emphatically. "It’s a real ‘can do’ state and is functional everywhere and has a competence and humility. I’m a pilot, and I’m a huge fan of the Wright Brothers, who are the absolute embodiment of Ohio. They’re humble, tenacious, independent, interested in getting it right. I’m so looking forward to performing in Cleveland.”