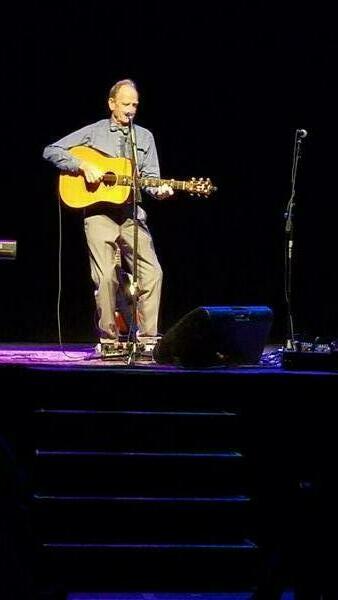 Livingston Taylor is one of those artists you’ve heard of but might not know too much about. You know his brother James well enough. Liv, as he is known, has traveled a less well-known path, with concerts in smaller venues and a decades’ long teaching gig at the Berklee College of Music. But as the sold-out crowd at the Greenwich Odeum Saturday night can attest, Livingston Taylor is a terrific performer: generous, funny, wry and comfortable as a pair of favorite slippers.

Taylor is someone who loves to perform and feels right at home on stage with a guitar in his hands or a keyboard beneath his fingers.

Some performers share stories on stage. Taylor shares background – he’s a word guy and he loves to talk about his lyrics (or the lyrics to other songs he sings). For instance, in his song, “Never Lose Hope,” he recalls the challenge of finding rhymes for an entire song for that word, hope. Never fear, he does it – envelope, soap and nope, among others – but he lets us in on the craft behind the melody, giving the audience a bit of a shrug when he gets to some of the sillier rhymes.

To the delight of one couple in the audience Saturday, Taylor performed “Our Turn to Dance,” a song he first recorded in the early 1990s. The husband had requested the song before the show, noting they had been to see Taylor perform the song 14 years earlier (at the Odeum, no less!) on what turned out to be their first date.

“Olympic Guitar” was Taylor’s vision of what it could be if only guitar playing became an olympic sport. His patter as he played was that of an announcer at the Olympics – funny, clever and, yes, Taylor stuck the landing.

Other highlights, Taylor’s rendition of Kermit the Frog’s “Rainbow Connection,” “Heart & Soul” into “Sit Down, You’re Rocking the Boat,” his own, “I Must Be Doing Something Right,” and the lovely “City Lights,” by Bill Anderson, which Taylor sang with a talented young guy named Nick Fede from the audience. Fede was there with his family for his dad’s birthday.

Taylor ended the night with songs from the Wizard of Oz, reveling in the lyrics to “The Jolly Old Land of Oz” (We get up at twelve and start work at one, Take an hour for lunch and then at two we’re done, Jolly good fun), then segueing into “Somewhere Over the Rainbow.”

Singer-songwriter Seth Glier opened for Taylor, who introduced him as a former student. Glier’s soulful lyrics and clear vocals won over the audience. The Greenwich Odeum itself sounds better and better. With increasingly top-notch performers, the theater is a town treasure.